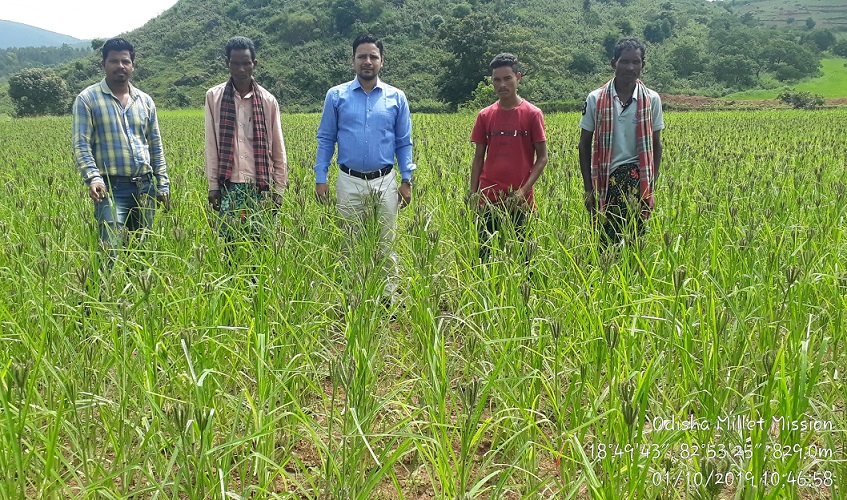 Bareng Jani (47) is from the Bhejapadar village of Mujanga Grampanchayat, Dasamantpur Block of Koraput District. He is a tribal farmer who owns 1 acre and takes 2 acres in a lease to cultivate millet. In 1 acre he cultivates Finger Millet and in 2 acres, the Little Millet.

Millet cultivation was not new to us and it was been cultivated by our forefathers. But the yield per acre was very low as we were just sowing the seeds as the monsoon approached us. Once we sowed the seeds we never went to see the crop again and only went at the time of harvest. We never gave attention to timely transplanting, weeding, and nutrition management said by Bareng Jani.

Adopting a new technology might be heard easy for a progressive farmer but it was not the case for a tribal farmer like Bareng Jani who had studied up to the primary level. Under Odisha Millet Mission, he was been approached by DHAN Foundation and their team in their village and was provided training on System of Millet Intensification(SMI) in Finger Millet.

After getting training on SMI, I changed my mind from traditional farming to modern technology farming. As per instruction, I made a raised nursery bed and sown the seeds after proper treatment with beejamrit. Only half kg of seeds was sufficient for planting one acre of the land.

18 days seedlings were planted in a row by maintaining a spacing of 25cm X 25cm from plant to plant and row to row. FYM was applied at the time of transplanting. First, weeding was done with a cycle weeder after 20 days of transplanting, and second and third was done at an interval of 10 days.

After each weeding vermicompost and pot manure(Handi Katha in Odia) was applied. In the beginning, I was not in favor of log rolling but after getting convinced about its importance done the activity followed by liquid manure application by spraying with a sprayer. It gave excellent results.

I never have seen or expected such yield in my life. I am very happy to get 8 quintals per acre. Earlier I used to get only 2 to 2.5 quintal per acre which was sufficient for home consumption round the year. But now I am able to sell my produce at the rate of Rs.3150 per quintal under the Mandi system as well as keep for home consumption. This year I sold my produce and was able to get a profit of about Rs.10,000. This earning is a bonus for me as I was not able to get such a yield earlier.

Besides Finger Millet, I got a yield of 6 quintals of Little Millet from 2 acres and I was able to sell Little Millet in the local market at the rate of Rs.35 per kg and could earn a profit of Rs.15,000. This year I have broadcasted the seeds and I am thinking that in this coming season I will go for line sowing in Little Millet as it will be easy for weeding operations and nutrient management.

Bareng Jani has totally grown these millets with organic fertilizers and he has used all the locally available resources. Even he has used his own seeds which he had conserved for 3 years. He says that the Bhairabi variety has the potential to give more yield if we manage the intercultural operations and nutrients properly.
The Millet farmers of Bhejapadar are inspired and motivated to see the progress of Bareng Jani in Millet Cultivation.