Browntop millet (Brachiaria ramosa (L.) Stapf; Panicum ramosum L.) is an introduced annual grass that originated in South-East Asia. It is grown in Africa, Arabia, China and Australia. In the US, it is mainly grown in the South-East for hay, pasture and game bird feed. The browntop millet, called korale in Kannada, is specially grown in rainfed tracts of Tumakuru, Chitradurga and Chikkaballapura districts of Karnataka state. The crop is popular in this region in terms of cultivation and consumption. This millet seed is grown in a variety of soils and climates. Like other millets, it is a hardy crop and well suited for dry land.

Browntop millet is drought hardy and heat tolerant, but can also be planted in low areas that get flooded. The shadow tolerant nature of this millet makes it distinct from other crops. The crop survives under arid conditions and has the potential to spread widely because of its rich nutritional value as well as its ability to adapt to climate change.

Browntop millet is an annual warm-season species that grows 1 to 3 ft tall. The smooth stems have pubescent nodes and may stand erect or ascend from a decumbent base. The leaves are 2.2 to 18cm long and 6-18mm wide; both surfaces are smooth. The inflorescence is indeterminate, open, spreading with simple axis and stalked flowers. It has 3-15 inflorescences and white flowers. Seeds are ellipsoid and tan in colour; they mature in approximately 60 days.

The field was deeply ploughed with a mould bould plough for moisture conservation in the month of June. Dhanica seeds were broadcasted for green manuring. After one month the dhanicha crop was incorporated into the soil to increase the fertility and status of soil and also 2 MT of FYM was broadcasted.
On 14.07.2019, the browntop millet seeds were treated with [email protected] 2gm/kg. 5 kg seeds were taken for 1 acre of land. 20:20:20 NPK was applied as basal dose on the day of sowing seeds. At the time of sowing, there was little bit of moisture in the soil. After 7 days the germination of seeds had occurred. After 30 days weeding was done manually. 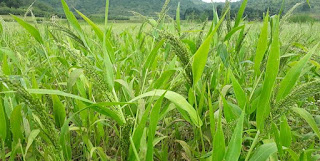 Browntop millet is remarkable for its early maturing ability. The crop is harvested in 90 days. Because of its very short maturity, it can be planted as late as August and still offers ample supply of grains. It survives even if the monsoon is delayed. It requires a little bit of moisture during sowing and one or two rains later, for the crop to grow and mature. Even with a broadcasting method, the crop yields about 7 to 8 quintal grains per acre and four tractor loads of good quality fodder which cattle relish.
Browntop millet is not only nutritious but also very delicious. The millet is gluten-free and rich in essential nutrients. It is a rich source of natural fibre when compared to other grains. Korale contains about 12.5% fibre due to which it serves as medicine for dealing with lifestyle diseases. Lower incidence of cardiovascular diseases, duodenal ulcer and hyperglycemia (diabetes) are reported among those who regularly consume millets.
It suppresses root-knot nematode in the soil. The sharp leaf structure of the plant obstructs the intrusion of rats into the fields. Hence, farmers grow this crop also to control rodents in coconut and areca nut groves.
From this trial, it is understood that Browntop Millet can be grown in Koraput and farmers can get a good price in the market.
Share the Article