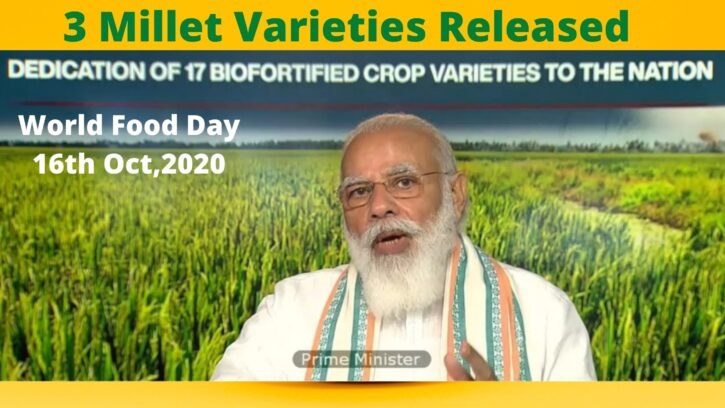 On World Food Day, Prime Minister Narendra Modi dedicated 17 new Biofortified Varieties of 8 crops to the Nation out of which 3 millet varieties released were 2 Finger Millet and One Little Millet. It was the day to mark the 75th Anniversary of the Food and Agriculture Organisation of the United Nations. The theme of the day was Grow, Nourish, Sustain Together.

As per FAO, we produce enough food to feed everyone but still, there is an imbalance in the food system due to hunger, obesity, environmental degradation, loss of agro-biological diversity, food loss and waste, and lack of security of food chain workers.

Recently, the World Food Programme was awarded Nobel Peace Prize for 2020 for its efforts to combat hunger, for its contribution to bettering conditions for peace in conflict-affected areas, and for acting as the driving force in efforts to prevent the use of hunger as a weapon of war and conflict.

Noble Prize turns the eyes of the international community towards the millions of people who suffer from or face the threat of food security said by FAO, Director General, QU Dongyu.

To mark the 75th Anniversary of FAO, Rs.75 commemorative coin was released by our Prime Minister.

The best part of the day has given me happiness, seeing the release of 3 Millets Varieties of premier agricultural research Insitute – Indian Institute of Millets Research, Hyderabad. As you know Millets are the future generation crops that will be addressing the imbalance of the food system as mentioned above.

Now let us see the millet varieties released and their qualities: