Odisha tribals possess knowledge of making different types of traditional millet recipes from finger millets for ages. In Odisha Millet Mission, Food festivals were conducted by DHAN Foundation in Dasamantpur Block of Koraput, where the tribal come out with the hidden talent of making food items with Finger Millet. Few feel shy, as they don’t want that someone should know their food items. To encourage them some prizes were kept for the best recipe.

Information related to the traditional millet recipe out of finger millet was collected from 100 sample households. It was seen that most of them consumed one recipe most about 38 percent that is Jau (Finger Millet mixed with warm water). About 35 percent of household samples consumed Jau, Mudde & Tampa (1Rice:2Ragi flour). Few consumed Pitha occasionally. It was interesting to note that they also consumed other items like Ragi in between Jackfruit leaf (Water+Ragi Flour+Salt+Jaggery+Chilli). Cakes are made by wrapping ragi flour in maize husks or banana leaves and then roasted.

(Figure: Consumption of traditional local recipe by the sample households)

This section is based on the facts and figures collected through the survey in addition to that through observation and discussion with people at the village level. It focuses on consumption-related indicators such as frequency and time of consumption, the quantity of consumption, and reasons for consumption.

But it was also observed that the quantity intake increases during the summer season and less or negligible during rainy days.

Millets are the storehouse of nutrients as they contain protein, fiber as well as micro-nutrients such as beta carotene, iron, and calcium. Ragi containing the highest amount of calcium i.e. 344 mg in 100 grams of Ragi. No doubt, the consumption of ragi is playing a good role to address malnutrition in tribals. 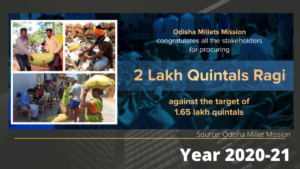 Odisha Millet Mission, taking the lead role to provide ragi in the Public Distribution System in Odisha at just Rs.1/kg. In the year 2019-20, around one lakh quintals and 2 lakh quintals in 2020-21 have been procured from the farmers of Odisha which will surely add momentum to address the consumption, malnutrition, and Nutritional Security.

Traditional millet recipes of tribals play an important role to address malnutrition in Koraput. But my concern is that children of tribals must be made more aware of the nutritional aspects of millets and introducing millets in the mid-day will be a wonderful step. Odisha Millet Mission has taken the step and getting an overwhelming response for this initiative.