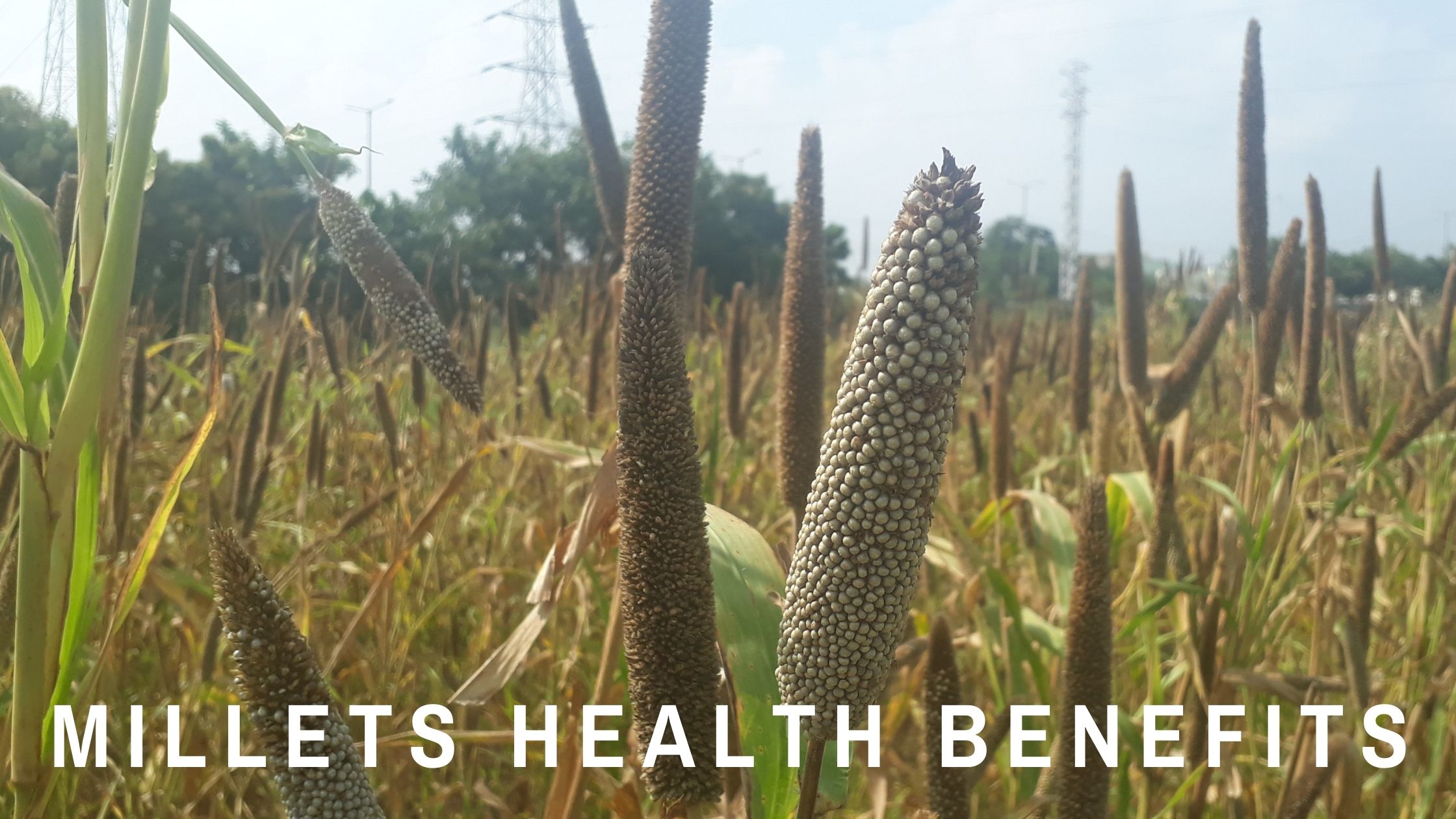 Millets are small-seeded grains. Nowadays it is called Nutri-Cereals. Millets are the first domesticated crop in the world. It is suited to harsh environments. We can also call millets the next generation of crops. Millets are full of nutrients and can solve many health problems arising due to the current lifestyles. They are gluten-free and have a low glycemic index. The Government of India has approved 2018 as a national year to promote the production of Nutri-grains. Millets are the only crops that will address important issues in the future.

Let us start with the types and millets’ health benefits in detail.

Types of millets grown in India :

1. FINGER MILLET AND ITS HEALTH BENEFITS :

Finger Millet (Eleusine coracana), commonly known as ragi. It is one of the important millet crops grown for cereal and fodder purposes under various agro-climatic conditions in India. The crop requires little input and is less affected by major pests and diseases and matures in 90–120 days. The major finger millet growing states in India are Karnataka, Uttarakhand, Tamil Nadu, Andhra Pradesh, Odisha, Jharkhand, and Maharashtra.

Finger millet contains about 65–75% carbohydrates, 8% protein, 15–20% dietary fiber, and 2.5–3.5% minerals. Finger Millet grains are highly nutritious and are known to contain the highest amounts of calcium (344 mg / 100g grains), iron, zinc, dietary fiber, and essential amino acids. Protein content in finger millet helps in preventing malnutrition and is also an ideal food for diabetics as it has demonstrated the ability to control blood glucose levels and hyperglycemia.

2. FOXTAIL MILLET AND ITS HEALTH BENEFITS:

Foxtail Millet (Setaria Italica (L.) P.Beauvois, the oldest cultivated millet in the world. It is cultivated in about 23 countries in Asia, Africa, and America. It is a self-pollinating, short-duration, C4 grain, good for human consumption, grain for chickens and cage birds, and fodder for livestock. Foxtail Millet is the second-largest producer of millet in the world. In India, it is mainly grown to some extent in Andhra Pradesh, Karnataka, Tamil Nadu, Madhya Pradesh, Uttar Pradesh, and northeastern states of India.

It is used as an energy source for pregnant and lactating women and sick people and children. Foxtail Millet releases glucose continuously without affecting the body’s metabolism. Foxtail Millet provides a host of nutrients, has a sweet nutty flavor, and is considered to be the most digestible and non-allergic grain available.

3. LITTLE MILLET AND ITS HEALTH BENEFITS:

Little Millet (Panicum sumatrense) is a fast-growing, short-duration cereal that can withstand both drought and waterlog. It is an important crop grown for food and fodder. It is domesticated in the Eastern Ghats of India, which maintains a large proportion of the diet among the tribal people of Sri Lanka, Nepal, and Myanmar. In India, its cultivation is mostly confined to the tribal areas of Madhya Pradesh, Chhattisgarh, Andhra Pradesh, and Odisha.

It is a wonderful millet that is suitable for all age groups. It helps prevent constipation and corrects all stomach-related problems. Its carbohydrate complex is slowly digested which is helpful for patients with diabetes. Little Millet contains 8.7 grams of protein, 75.7 grams of carbohydrates, 5.3 grams of fat, 1.7 grams of minerals, and 9.3 milligrams of iron per 100 grams of grains. Its high fiber helps in reducing the deposition of body fat. Little Millet has an important role in providing nutritional components such as phenols, tannins, and phytates with other nutrients.

4. PROSO MILLET AND ITS HEALTH BENEFITS:

Proso Millet (Panicum miliaceum) is able to evade drought through its quick maturity. Being a shorter duration crop (60–90 days) with relatively less water requirement, this escapes the drought period and, therefore, offers better prospects for intensive farming in dryland areas. Under rainfed conditions, generally, proso millet is grown during the Kharif season, but in areas where irrigation facilities are available, it is profitably grown as a summer catch crop in high-intensity rotations.
It is preferred for extreme soil and climatic conditions as it yields a reasonable harvest even in degraded soils under adverse weather conditions. Proso Millet is mainly cultivated in Madhya Pradesh, Eastern Uttar Pradesh, Bihar, Tamil Nadu, Maharashtra, Telangana, Andhra Pradesh, and Karnataka.

It contains a good amount of protein, carbohydrates, fats, dietary fiber, minerals, magnesium, and micro and macronutrients that have antioxidant properties and provide enough zinc, vitamin B6, and iron for daily functioning. It is easily digested because they are non-acid forming. They are rich in fiber which helps in making the stomach full for a long period of time and prevents overeating.

5. KODO MILLET AND ITS HEALTH BENEFITS:

The Kodo Millet (Paspalum scrobiculatum L.) is the origin of tropical and subtropical regions of South America and was domesticated in India 3000 years ago. Kodo Millet is extensively grown on the poorest soil in the whole of India. It is extremely hard, drought-resistant, and reputed to grow on rocky or gravelly soils. It requires less rainfall. It is a relatively long-duration crop that requires 100–140 days to mature as compared to 65–120 days for other millets. Kodo Millet is an annual tufted grass that grows up to 90 cm.

The grain is enclosed in hard, corneous, persistent husks that are difficult to remove. The color of the grain may vary from light red to dark brown. Its cultivation is prominent in Madhya Pradesh, Karnataka, Tamil Nadu, Telangana, Andhra Pradesh, Odisha, Bihar, and Maharashtra.

Kodo Millet contains a good amount of protein, carbohydrates, fats, dietary fiber, and minerals. The grain is recommended as an alternative to rice for patients with diabetes.

6. BARNYARD MILLET AND ITS HEALTH BENEFITS:

Barnyard Millet (Echinochloa frumentacea) is widely cultivated as a minor cereal for food as well as fodder in India, China, Japan, Korea, Pakistan, Nepal, and the semi-arid tropics of Africa. In India, Barnyard Millet is mainly grown in Uttarakhand, Uttar Pradesh, Karnataka, Tamil Nadu, Andhra Pradesh, Bihar, Gujarat, Chattisgarh, and Madhya Pradesh. Due to its remarkable ability to withstand erratic rainfall and varying weather conditions, it is been classed as one of the drought stress tolerant hardy crops which are largely cultivated in harsh and fragile environments with minimal use of agricultural inputs.

Due to its nutritional quality traits like high dietary fiber content and rich nutritional profile with iron, calcium, magnesium, and zinc minerals, it is gaining importance as a health food. This millet contains 11.2-grams protein, 10.1-gram crude fiber, 4.4-gram minerals, and 15.3 mg of iron in a 100-gram grain.

7. PEARL MILLET AND ITS HEALTH BENEFITS:

Pearl Millet (Pennisetum glaucum) is the most widely grown millet in the world and in India. It is been grown since prehistoric times in Africa and the Indian subcontinent.
With ovoid grains of 3-4 mm, the length of pearl millet has the largest kernels of all varieties of millet except sorghum. It can be nearly white, pa;e yellow, brown, grey, slate blue, or purple. The 1000 seed weight can be around 2.5 to 14 g with a mean of 8 grams. The height of the plant ranges from 0.5 t0 4 meters. Pearl Millet can tolerate drought, low fertility, and high temperature. It is a summer annual crop well suited for double cropping and crop rotation.
Pearl Millet contains phytochemicals that lower cholesterol. It also contains folate, magnesium, copper, zinc, and vitamins E and B-complex.

8. SORGHUM AND ITS HEALTH BENEFITS:

Sorghum (Sorghum bicolor), is a warm-season crop intolerant to low temperatures, resistant to pests and diseases, highly nutritious, and a climate-compliant crop. It ranks fifth in cereals produced worldwide and fourth in India. It is a principal source of protein, vitamins, energy, and minerals for millions of people, especially in the semi-arid regions.

It has a nutritional profile better than rice as it contains rich in protein, fiber, thiamine, riboflavin, folic acid, calcium, phosphorus, iron, and beta-carotene. Due to this, it is being targeted as a means to reduce malnutrition globally. It also helps to control heart problems, obesity, and arthritis.

9. BROWNTOP MILLET AND ITS HEALTH BENEFITS:

Browntop millet (Brachiaria ramosa (L.) Stapf; Panicum ramosum L.) is an introduced annual grass that originated in South-East Asia. It is grown in Africa, Arabia, China, and Australia. In the US, it is mainly grown in the South-East for hay, pasture, and game bird feed. The browntop millet, called Korale in Kannada, is specially grown in rainfed tracts of Tumakuru, Chitradurga, and Chikkaballapura districts of Karnataka state. The crop is popular in this region in terms of cultivation and consumption. This millet seed is grown in a variety of soils and climates.
Like other millets, it is a hardy crop and well suited for dry land. Browntop millet is an annual warm-season species that grows 1 to 3 ft tall. The smooth stems have pubescent nodes and may stand erect or ascend from a decumbent base. The leaves are 2.2 to 18cm long and 6-18mm wide; both surfaces are smooth. The inflorescence is indeterminate, open, spreading with a simple axis and stalked flowers. It has 3-15 inflorescences and white flowers. Seeds are ellipsoid and tan in color; they mature in approximately 60 days. Planting time: Browntop millet can be planted from mid-April until mid-August in most locations, though later plantings will result in lower yields.

It is gluten-free and rich in essential nutrients. It is a rich source of natural fiber, containing the highest fiber as compared to other millets about 12.5%. Due to the fiber content, it acts as a medicine for lifestyle diseases.

Author: Tapas Chandra Roy, A Certified Farm Advisor on Millets, ‘Promoting Millets from Farm to Plate’. In a mission to take the forgotten grains- Millets to Millions. To remain updated on my blogs on millets you can join my Telegram Channel – Millet Advisor.