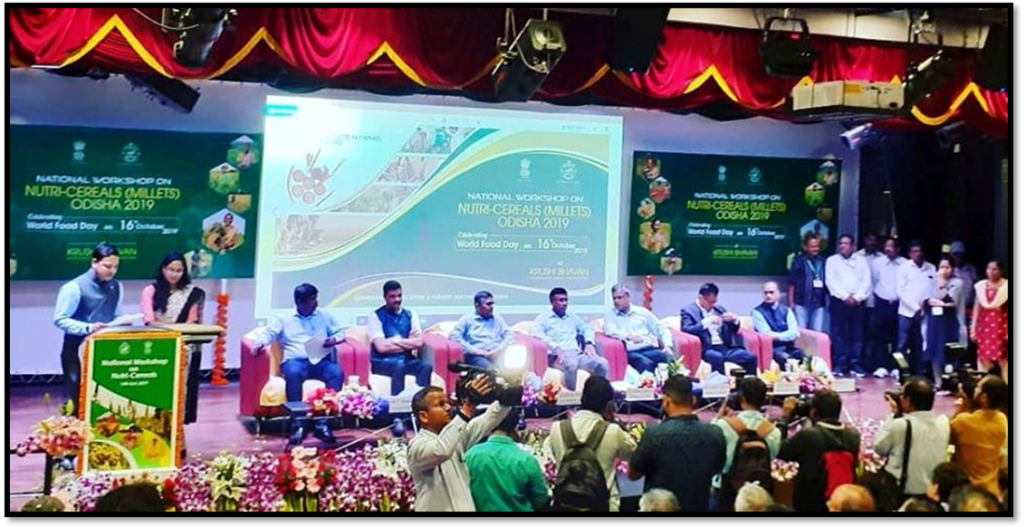 Inaugurating a national workshop on Nutri-cereals, Chief Secretary Asit Tripathy said Odisha is the first State to introduce millets in the public distribution system and Niti Aayog has recognized it as a model State in this regard. The Odisha Millet Mission, launched in 2017, has now been extended to 72 blocks in 14 tribal-dominated districts. The National Millet Mission started in 2018 has given a further boost to the campaign in the State.

“Odisha Millet Mission” is a unique initiative for the revival and promotion of millet production. The Centre has recommended other states to follow the Odisha model,” said Pradeepta Kumar Mohapatra, Agriculture Production Commissioner.
Related Post: Odisha Millet Mission showing the way forward.
Principal Secretary of Agriculture & Farmers’ Empowerment Sourabh Garg said the Odisha Millet Mission is a unique partnership model wherein the Government, academia, and civil society have joined together to implement the programs through farmer producer organizations.
“It is built on a comprehensive approach that includes production, processing, consumption, value addition and marketing,” he said. Around 50,000 farmers have been mobilized to take up millet cultivation with improved agronomic practices. The State Government has already started procurement of surplus millet from the farmers and the procurement target has been enhanced to one lakh tonne. Plans are afoot for the inclusion of millets in supplementary nutrition programs under ICDS, MDM, and PDS.

Deliberations on National Workshop on Nutri-Cereals:

Director, Country Relations of International Crops Research Institute for the Semi-Arid Tropics (ICRISAT) Arabinda Kumar Padhi said millets are climate-resilient crops and can be grown under stressed rain-fed conditions, and people of South and West Odisha have traditional skills in millet production undertaken over generations. “The highlands of the State have vast scope for millet cultivation as well. ICRISAT would provide the technology and international best practices for improving productivity in the State’’.
In the national workshop on Nutri-cereals, deliberations were held on the promotion of seed diversity, policy initiatives, challenges in the inclusion of millet in PDS, millet marketing, and value chain through framers organizations. There were also experience sharing sessions among farmers and NGOs on agronomic practices.
On the occasion, 14 leading millet farmers of the State along with representatives of leading NGOs namely Pragati and Pradhan were awarded.
Focusing on the role of agriculture and food production with nutrition and security, FAO, Country Representative, Tomio Shichiri said: ‘’While food grain production in India has increased over five times since Independence to almost284 million tonnes in 2018-19, there is a high rate of malnutrition in the country, Therefore, there is a need for diversification toward Nutri-rich crop production such as Nutri-Cereals and pulses.’’ The focus must not only be on increased food grain production of targeted Nutri-cereals such as millets. Promotion of homestead gardens and diversification of agriculture production towards fruits, vegetables, and aquaculture can contribute towards addressing the malnutrition.
Meera Mishra, Country Coordinator, International Fund for Agricultural Development (IFAD) India Country Office, said the changing patterns of consumption directly benefit farmer’s production system and income. Quoting an example of millet production in Madhya Pradesh, she said the tribal Baiga women in the remote Dindori district in MP grew minor millets – Kodo and Kutki – using traditional practices. Support from the government and IFAD program has increased production and engagement. Earlier only 750 farmers were doing millet farming on 750 acres and today these numbers have increased by 10 times to 7,500 farmers and 7,500 acres.

Dr.Paras Sharma, Scientist, ICMR-National Institute of Nutrition presented about nutritional perspective and gave the Solutions and future actions to improve millet consumption. Millet Production should be increased in order to maintain supply. Identification and development of high micronutrient varieties with low anti-nutrients are necessary.
Biofortification of millets crop is required to enhance micronutrients. There is a need for the development of millet processing technology at rural and urban levels. Degree of milling optimization to retain maximum nutrients and to reduce phytate and voluntarily adopted by the millet processing units.
The role of other inositols Phosphates (IP5, IP4, and IP3) needs to be looked in for mineral bioavailability. There is a need to develop cooking methods to maximize nutrient retention and bioavailability. A combination of suitable food to enhance the bioavailability of nutrients can be explored. Development of recipes according to the region such as chapattis for the northern part of the country. Improvement of protein quality of millets through genetic approaches.  Blending with other cereals to enhance the organoleptic properties and ease in novel food product development.
Germinated/sprouted/ malted or fermented millets have high bioavailability of micronutrients which may be served in MDM HTST processed foods including popping/puffing and roasting also reported to improve the mineral bioavailability and such products also have a longer shelf life so these may be included in the food supply system.

Mr.Ravindra A, WASSAN, presented on “Diverse Seed Systems for Millets” and why there is a need for diversity. How a seed system can be managed by the community and its replication in biodiversity blocks.

Dr. A K Padhee, Director, Country Relationspresented on ‘’ICRISAT initiatives in connecting crops in semi-arid tropics to meet nutritional requirements”. There is a need for demand-driven innovation and this can be done by mainstreaming nutrition, empowering women, and attracting youth into agriculture. Pointed out the approaches for adoption by participatory and partnering, building capacity at state and local level, integrating communications, monitoring, and evaluation & finally policy support.

Promotion of Production & Consumption of Nutri-Cereals:

NITI Aayog, Government of India, presented on‘’ Promotion of Production & Consumption of Millets’’. In this, the key recommendations of the committee were focused.
The suggested roadmap that can be achieved in short/medium term duration:
Finally, in the long term duration, the production of millets is to be increased.
Odisha Millet Mission presented the Future roadmap- taking millets to million.
Dr. Usha Dharmaraj, Sr. Technical Officer, Department of Grain Science and Technology CSIR-CFTRI, Mysore presented“ Millets in Community Feeding- Challenges and Interventions”.
Challenges:
Interventions:

Dr.Vilas Tonapi, Director, ICAR- Indian Institute of Millets Research, Hyderabad presented on the ‘’Promotion of Millet Diversity’’. ICAR-IIMR has undertaken a millet germplasm exploration in the Dong district in Gujarat and collected 37 accessions of five different millets from 27-28th October 2018. In which, the maximum of 16 acc. of Little millet followed by Finger millet (14 acc.), Sorghum (5 acc.), Foxtail millet and Barnyard millet (1 acc. each). The exploration has covered 27 villages in 4 Taluks in Dong district. The altitude ranged between 161-526 m MSL

Overall, the Workshop on Nutri-Cereals was a grand success.

***Please put your valuable comments and suggestions for the development of Millets in India.
Share the Article